Posted by Jarrod
The Great Ocean Road Marathon ( aka GORM or GOR Marathon) is a 45km road race that runs from Lorne to Apollo Bay on the Great Ocean Road in Victoria Australia. It's only two hours for me to drive from home to the start line for this, so it made sense that I entered it this year, finally!
It's a little too close to Comrades Race so I simply couldn't enter GORM any year prior.


My race prep for GORM has been pretty relaxed, on the back of my run at Canberra (which I've finally blogged here) I took some easy weeks and have hit the gym a few times per week to do strength and flex work. Not many km's were in the legs since Canberra (as you can tell from my Endomondo profile!) but I have had a focus on quality workouts lately. Work has been hectic in the past few weeks/months and as a result my running and social media interaction have both dropped off significantly ;-)


Most of my fellow runners I've been training long with are all now deep in their taper program ready for comrades next month and my long standing training partner has been out of action with some serious ankle damage from Roller Coaster Run. As a result my training has been very much a solo affair. Add to that the fact I had a bucks party to attend on Saturday prior to the marathon - which involved a paint ball skirmish and a late night of drunken antics - you could think my preparation was terrible for this race! Thankfully the guys kept my marathon in mind and I was supplied with a slab of water so I was still able to partake in the bucks festivities!

The race day forecast was for 14c with 13kph head winds and a 25% chance of rain. Knowing what the weather could turn out like, I prepped for the cooler climate with a thick long sleeve shirt, gloves and a beanie! I had also planned to carry a light raincoat on my fuel belt, but as race start time neared I decided to gamble on the 25% and instead carried my phone and thus I was able to take some photos and even make a few phone calls along the way! Sorry I wasn't live tweeting but my data services were crap on the day :D

The course is awesome, enough said! Taking in the breathtaking views all along the waters edge whilst you run the 45km of sealed tourist roads as they repeatedly rise and fall all the way from Lorne to Apollo Bay.

So I met a billion people at the start line again, always good to see them! 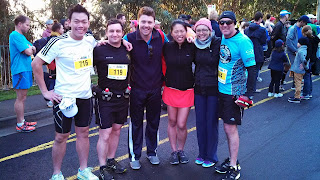 hanging out at the start line, mostly parkrunners, from left to right: Kai, Me, John, Crystal, Ruby and Phil

My typical start line conversation often involves talking to someone about comrades, and this race was no different. I met a South African man named Alex with an English chap named Mark. We were talking (reminiscing) about last year's Comrades Race and Alex said he had "such a bad race" and only managed 7 hours..! Suffice to say when I said it took me 11.5 hours I felt like I was way out of my league! 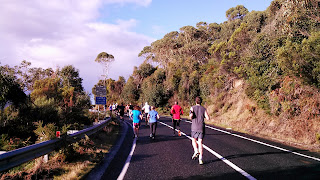 Other runner-bloggers might call him, Mr Red Shirt, but I knew him as Alex the South African!

My race plan, knowing the undulation of the GOR, was to aim for approximately 5:45/km on the downhill and under 6:45/km on the uphill, hoping to average out to something under 6:15/km for the entire run.
I started the race off running with Kai yet again (we ran together at roller coaster earlier this year ) and we ran the first 10km in an hour exactly. When he realised we were on track for a 4h30m time for the whole race he was keen to hit that target! 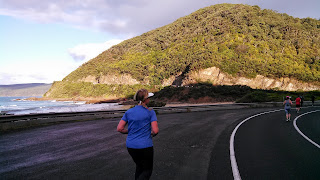 Kylie taking in the views of the GOR Marathon

It wasn't long after that where we met some new friends on the course, in Kylie and Claire and at the same time my buddies from the start line had caught up (Alex and Mark). So we formed a pseudo 4h30m pace group. Around 20km into the race we were joined by the great Julia Thorn (author of 'Passion for Distance') who was running her 181st lifetime marathon/ultra!! 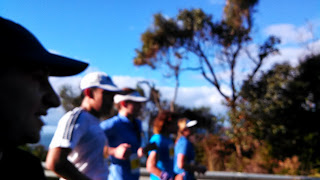 She treated us to a few nuggets of wisdom and we discussed some of the races we had both completed previously whilst the rest of group just kept laughing at our craziness! We ran together until the drink stop at 30km when some of us walked through, Julia and Kylie just powered straight through and up the hill leaving us behind the pace by a minute or three.


So for the next 8km or so, Claire, Kai, and I started to count the kilometers more closely. Keep in mind this is Claire's first ever (ultra) marathon; her longest training run prior to this was only 34km. In some ways she was lucky to have me there, talking so much to distract her from the distance she had covered. ;-)
Unfortunately I also pointed out that this was the furthest she had run :-D

Some of the stuff we discussed was about focusing on how far there is left to the finish instead of looking at what's behind you. We had such a consistent pace, I reminded her that in the last 10km we will be passing many people as they fade while we kept the legs turning! 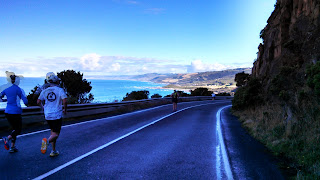 Apollo Bay is in sight for Claire and Kai

Kai was popping up next to us then dropping away, each time appeared to be calculated to make it into the frame with us for the next official photographer.

The three of us cruised our way to the marathon marker, ecstatic with her marathon time of around 4:21 Claire almost broke into a sprint! Most of the field around us at this point started to walk. Still feeling fine, coupled with a burst of adrenaline at the thought of being so close to the finish, I'm pretty sure we picked up the pace by almost 30 seconds per kilometre and started passing heaps of people!

Into the finishing straight, I spotted Julie and Phil (who finished an hour earlier) cheering us on, dished out a few quick hi fives, as we kept moving to the finish. 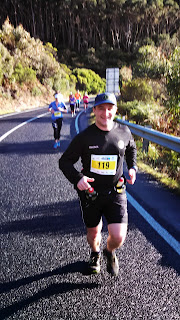 just a lovely run along the coast, all smiles :-D
Then two very loud and vocal supporters got my attention. Screaming my name and jumping all over the place, it was awesome to see the energetic and bubbly Tanya (@tanya_fed_marie) and Mel (@marathonmel78) who had travelled down from Melbourne just to cheer us runners on! So I stopped briefly and dealt out some salty sweaty hugs and kisses before taking off towards the finish line!

Annoyingly my right calf started cramping, so even though I really wanted to catch up with Kai and Claire, I didn't want to ruin my calf for this weekend at Barossa! So I cantered to the finish, done and dusted! 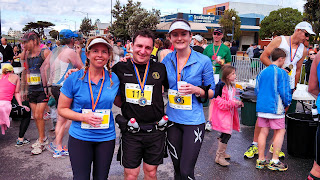 Kylie, Claire and myself with our finisher medals!


I assume the cramps were just a result of breaking my rhythm for some early hugs and celebrations, nothing more sinister, will see what happens at barossa this weekend!