This is the second of my 13in2013 races, and we sure picked a tough one! I decided to tackle this race after I had enjoyed Marysville Marathon last year which was also a fun and scenic trail race!

I knew it was going to be hilly but no amount of guessing prepared me for the reality race director Rohan Day had in store for us! 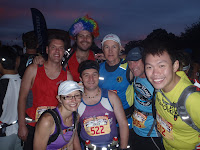 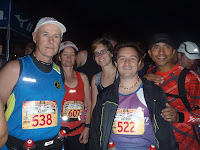 
So my preparation for RCR was not too bad, I was a little slack with training, missed a few strength sessions and well, music festivals interrupted things!
As far as race week goes I kept to my usual habits of fluid intake, berocca, endurance max and bananas! I was feeling fresh for the race, but the closer it got, the more I feared my ability. Then my friend Kai went and posted a pic of the race profile and that sent my mind into a spin!

There were voices in my head saying I should cut to one loop or bail out, because I wasn't ready for this. Then I thought, I've run Comrades before, this should be a walk in the park! Well, hike in the park would be more apt!
I booked a caravan park for the night prior to race day to share with some fellow runners, normally I wouldn't mention this, but when someone is really accommodating, you got to give them kudos! We stayed at Wantirna Caravan Park and they were so kind to allow us to return to the park after the race to use the amenities block before driving home! They were so lovely, we couldn't have thanked them enough so if you ever stay there do say hi to Nicole from me!


The course itself, although I can't describe much, was beautiful. If you took the time to stop and look around it was amazing, some spectacular views of Melbourne from afar. Throughout the day, we had small spots of rain drizzling here and there. So the air smelt of fresh rainfall, forest and eucalyptus. It was refreshing and quite peaceful, if not for the sounds of runners trampling along the course grunting and moaning!
It's a 21.5km course with either a one or two loop option. Of course I tackled two loops! 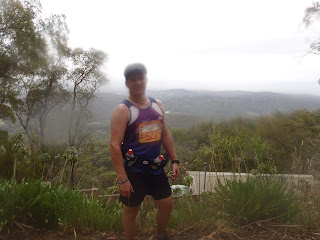 Thats sweat on my lens, awesome! 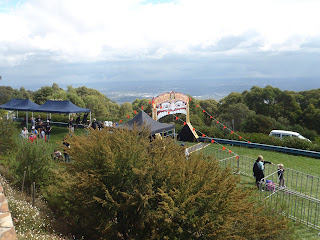 Two parts of the course stuck in my head specifically, dodds and trig track. Dodds was a ridiculously steep climb section that felt like went for 2km from about the 5km mark. I hated it the first time even more knowing I'd be back there in a few hours!
Trig track is near the end of the course, about 500m of technical trail. This part was fun, sure it was steep and scary and seemed a bit crazy on tired legs, but it was immense fun!


The weather for the race day couldn't have been more ideal, ok maybe slightly warmer at the start, but otherwise great. It was overcast and wouldn't have touched on mid twenties (celsius) all day. The rain didn't really kick in until my buddy and fellow Comrade George was coming through sweeping; we were at the Sky High cafe enjoying a hot beverage by then - poor George was soaked through!


I ran most of the race with my friends Kai and Sally. We talked about Comrades and I compared every climb to something in South Africa! I took a simple run and walk strategy in; I didn't want to burn my legs climbing every incline, especially when I really didn't know what would be around the next bend!

So we walked strongly up each incline, which was a lot, and pounded our way down every section of downhill. Kai in his Hokas looked like he had a semi-controlled freefall in each steep descent, Sally in contrast was controlled, careful and calculated. For some reason they were taking my advice on when to walk, when to run and when to pose for the cameras! Sally had a great leg strength and really pushed our pace on the uphills, Kai was carefree and speedy on the downhills. It seemed to work well and we pushed each other through each section working to each of our strengths and weaknesses!

As far as fueling goes, this time I didn't drop any of my supplies (yay!), I kept my camera in a separate pocket, and left my phone alone! Haha, lesson learnt!
I took torq/shotz gels on the hour and must have drank close to 3 liters of fluid both water and electrolyte. I wore my 4-bottle fuel belt with full compliment of pockets along with the SPIBelt for my camera!

The aid stations, although few, we're fantastic! We had plenty of options for water,electrolyte, coke, and various foods including shotz gels! The people working on the aid stations were energetic and really helpful. It was great to see them with big smiles and full of positive energy! We couldn't thank them enough as they filled our bottles with water or electrolyte while we hoed into the food at the tables!

Special mention to the guy who wore a clown suit for the two loops, David Hughes, you're a legend, we really appreciated the laughs!

Overall I hated this race (in an endearing way) but at the same time I'm so happy to have conquered it, I'd even consider returning for another shot at it!
If you were looking to challenge your half marathon skills but not yet ready for a full marathon, the one loop option is perfect for you here! If you want a good challenging trail, this is probably one of the harder trails you could find covering this short a distance! Two loops are not for the faint of heart so even though 7 hours for 43km seems a long time, it's quite an aggressive cutoff considering the terrain!
Anyways it was great painful fun, I'll be back again I'm sure! 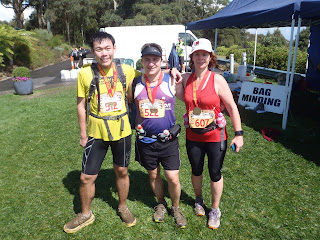 Kai, Me and Sally - FINISHED!

Posted by Jarrod
Well I have to put this totally non running related post here!
I'm just recovering from going to Linkin Park at Rod Laver Arena (a sidewave), then Soundwave Festival, and then a week later I got to see the Presidents of United States of America.
I was basically going to Soundwave to see Stone Sour and Bullet For My Valentine. The rest was a bonus.
In the week prior to Soundwave I got handed tickets for corporate box seats at Linkin Park who were being supported by Stone Sour! Hell yes!
So I had the fancy suit treatment in our corporate box, ate a heap of appetisers , and drank my body weight in alcohol. Had a great time enjoying the music in a nice and relaxed environment!

I made it into the local news rag!

Posted by Jarrod
I was contacted by the promoters for the upcoming Canberra Marathon as someone they could write an article about as a way of promoting both the Australian Running Festival and my Australian Sweep attempt.
Anyone who knows me, would realise I jumped at the chance. A chance to talk all about myself? Of course I will!
They called a few days later to say the local paper would be in contact. So last Thursday I met with the reporter (@JustineMB_29) and photographer and blabbed about myself for twenty minutes. Kudos to them too, they were really good at appearing interested! ^_^

Anyways here is a picture of the article as it appeared, and a sports feature at that! The article is also available online.  People who remember me from my high school days wouldn't have predicted this was ever possible I'm sure! 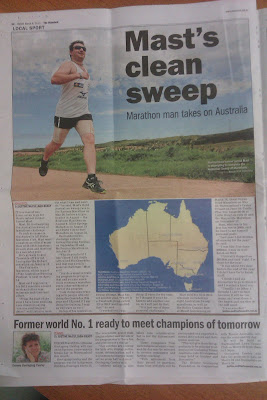 So that's my 2 minutes of fame, what else have I been up to...?
I've been very busy at work lately. I was never one to blog often, but I have been meaning to write more often than this!

I haven't stuck to my training program well lately, it's been broken apart by some "inconvenient" music festivals and long awaited band tours, I'll write more about that in another post!

Roller Coaster Run is this weekend and I'm looking forward to it even if I do feel under prepared. I'm just excited to meet more of this awesome running community and share some sweat in a new environment!

That's all for now, so a good few questions for today are;
What sort of distractions do you allow to 'interfere' with your program?
What do you think when you compare yourself now to way back in your school days?