Posted by Jarrod
Well, City to Surf is a whole race series with events all over the state climaxing with the marathon in Perth! It appears to have only been running a few years, but its well backed by the community and state. I absolutely loved this race, so many aspects of it just made me so happy to be a part of this, hopefully in the coming blocks of text I can convey everything that I enjoyed about it.

It's only been a week since my last race,  and I've only managed a few short runs this week. At the tail end of the week I got really sick despite feeling invincible at the start of the week! Glands were swollen and I had a fever, but no way in hell was this going to stop me working, let alone running in Perth!
I flew on the earliest (and cheapest) flight I could get to Perth, 7:15am, so again, I slept in my car at the same rest area the night before my flight. I learnt my lesson from last time and booked ahead for my car parking, checked in via the web, and started my car as soon as I woke up to defrost the windscreen! Everything went to plan this time and I was at the airport nice and early, stress free!


Once I got into Perth, I made my way into the city and checked into my hotel. Speaking of which - the Pensione Hotel in Perth was amazing, super accommodating, good value, great service... it was a most enjoyable stay.. they let me check-in super early and then also let me have a late checkout for after the marathon at no extra charge!
I met with my friend from twitterdom @michloise for a 1 hour jog along the river followed by an epic mission to find lunch on the Saturday, hunting for pasta. It was great meeting yet another tweep and we had a blast running and chatting!

Fellow sweeper Simon was splitting accommodation with me again so we met up after lunch and then went off to check out the expo. We were pretty late, but the expo was fantastic! Amazingly well setup, catering for all sorts of running related things and had all your pre-race needs covered. Signups, Helpdesk, warm clothing drop off, race kit collection... So much stuff, I was in awe! Let's just say, if you head along to this race, make some time to really check out the expo!


As I tweeted, the forecast was very dire, with thunderstorms and rain predicted. It looked like this was going to be a rough one weather-wise... Low of 10 high of 21 sounded great except for the 90% chance of 10mm rain!
As it turned out, it did rain, but only a casual light rainfall that peppered the course for the first 20km, enough to make it greasy, but not bad enough to really soak us. The rest of the thunder and lightning stayed away and I doubt we came near that promised 10mm of rain :)


I didn't research the course prior to the race, so we got our first glimpse of the map when we saw it at the expo. The course is designed to take in the sights in and around Perth before sending you off to City Beach to find the finish line. It consists of an initial 21km loop through Perth and along the river, which is all pretty flat and easy. It then goes back through the start line and heads straight up the first of a few hills. It weaves around Kings Park and through the course of several switchbacks before it trundles on towards City Beach for the finish area.

I started this race plodding along next to Simon. He was feeling much better now compared to Alice Springs and was planning to attack this race and it didn't take him long to accelerate away from me this time.
Since I had been so unwell only days ago, my plan was to just take it easy and get this one done. I settled into a relaxed pace and although I wasn't chatting away busily, I was already enjoying the course. It was nice, the weather wasn't exactly picturesque but I was enjoying the atmosphere and the foot-powered tour of Perth!
Between 10km and 15km I met a fellow comrades runner, and we had a great old chat while running together for quite a few kilometers. This is about when I realized I had been holding four-hour marathon pace!!
I was running pretty quick (for me) considering I had been so unwell, I thought about backing off and playing it safe, then decided I have four weeks to recover this time so I might as well give it a crack - who cares if I have to walk/crawl to the finish!


Running along the river was great, nice and flat and despite the rainfall, still quite nice to gaze upon - I even took the time to snap a few pics of the Swan Brewery on my way back towards the start/half area.
As we came through half way which is through the start line again, I was feeling confident I was going to nail under 4 hours. But 100m up the road as I saw the first climb, I decided 4-05 was more likely!

This half of the race is where it gets interesting, which is good to know, since those entered in the half marathon missed out on the lovely flat section we enjoyed :-D

We continued through an undulating course gushing with scenic views all around Perth. Kings Park was quite a treat as we cut in and out of each of the switchbacks involved here.
Actually right before we entered Kings Park I noticed this drunk guy swaying on the street out the front of a house, saluting us with his glass of wine as if to taunt us. I took great pleasure in seeing him again, after we left the park, standing in a puddle of red wine picking up the broken remains of his wine glass from the pavement. I wish I had thought to snap a picture but I was laughing too much!

Anyways, I had been concentrating on this 4-05 goal but as I looked up at the climb on our way out of Kings Park, I decided 4-10 was my new goal!
I was caught off guard by another Comrades runner, I was so focused on keeping my pace up I didn't notice him talking to me (I know that's hard to believe) but then we had a great chat, he was crazy enough to have ran Comrades this year so it was great to hear the war stories that he had to tell. He paced me well for the closing kilometres of the race dragging me along until around the 38km mark when someone decided to put another ridiculous hill in the way!!
Of course that is the point where I decided that 4-15 wasn't too shabby a time - all things considered, so I dawdled up this hill before I finally pushed my way on to the finish. As it turns out, it really wasn't that big of a hill, just that seeing an incline, that close to the finish, it looked like a cliff!


I was absolutely elated as I came through the finish line, feeling fantastic, like I could run another 10 or 20 kilometres. I had just finished the crazy month of August. I had just finished my third marathon in 4 weeks. It was the quickest time I had ran in the last 4 weeks, and I had just finished a marathon after feeling near-death only two days ago. Not to mention that this is race number 10 for the year and the 6th State in the sweep ticked off.. Yep, I was ecstatic!

After soaking up the glory of having crossed the finish line, we then continue through the finish chute where we have to walk, almost taunting us, down this steep grassy embankment down to where all the cool post-marathon stuff is!

The whole finish area was simply amazing. Similar to Brisbane Marathon, there was a whole recover area for Marathon finishers. This was a large covered area which included change rooms, a stretch area, massage tables and a huge spread of free food and drinks! There were plenty of toilets nice and close to the finish line too. Everything about this just seemed so well thought out and really looked after the extra hard-working Marathon finishers!

I met up with Simon in the marquee, after consuming twice my body weight in food and drinks, and getting changed into my clean dry warm clothing we wandered off to find the buses.
As much as I would like to complain, the fact the buses were probably 3km from the finish line, wasn't actually an issue because the huge array of club tents and food/drink stalls we had to go past on our way just made this event feel that little more spectacular. There was a real festival sense to this event and I felt proud to wear my Marathon Finisher medal with its bright red ribbon as you walked through the crowds of people with their blue and green ribbons. 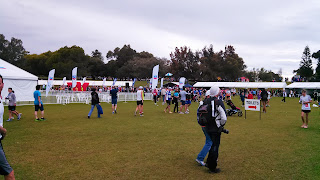 This was another thing that impressed me - the bus area. TransPerth had a seemingly non-stop flow of buses coming in to pick up loads of runners. There was a cattle-race sort of setup to fan people into separate areas to queue up for the buses. It took only a few minutes before we were on a complimentary bus making its way back into the City.

Once back in the City, Simon and I quickly made our way back to the hotel for a shower and check-out.
The last thing we had on our post-race agenda was to hunt down one of my two favourite post-race meals - Curry!!

We wandered into the Perth mall and found ourselves a feed. What stood out for me here was the number of people we saw wandering around the shops proudly wearing their medals. They were everywhere - granted there weren't many with Marathon medals - many still had their race bibs on! I think this was a direct result of one of the race entry perks; your race bib meant you could travel on TransPerth for free anywhere up until 4pm.

I was so impressed by my experience I had to email the organisers of the event straight away saying thanks, this was their response:

Hi Jarrod,
Thank you so much for taking the time and sending us your email. The team here really appreciated it and it put a smile on all our faces!
We definitely hope to see you again next year, and good luck with all your other future running events.

In summary, I would love to get back to do this one again and seriously recommend this as a great addition to your Alice Springs marathon and holiday planning ;)