Posted by Jarrod
Cadbury marathon, Hobart, Tasmania; the first of my many marathons in 2013!

I travelled over to Tasmania and well, my preparation was far from ideal. I took the opportunity to holiday with my gorgeous 4 year old daughter (hence forth I shall refer to her as Little Miss J!) for the week after doing the race. As a result, we sailed on the Spirit of Tasmania, taking my car over for the trip! We went out for dinner in Melbourne with a great group of runners I've met through Twitter the Thursday prior to sailing, which although fun meant a rather late night. Early to rise Friday morning for a 6am boarding of the Spirit of Tasmania only to find the boat was 2 hours behind schedule!
9 hours sailing, with Little Miss J wide awake, made for very little rest at all for me! We arrived in Devonport at 8.30pm it was 9.30 pm before we were off the boat and within 5 minutes Little Miss J was fast asleep, then we had the long drive south to Hobart, it was after 2am before we got to bed!
Don't forget that I also completely missed my typical Friday pre-race pasta load up, since the boat didn't serve dinner and well the only places to eat in Devonport were fast food!
Saturday was a busy day too and even though we had a relatively early dinner, I still managed to stuff around until late in the night getting my race gear organized and the usual gear layout ritual.


Race morning it was chilly but nothing like the icy cold weather I had been warned about in Tasmania, in reality it was probably warmer than the start of most Melbourne marathons I've been to. The day would've stayed low to mid twenties with decent cloud cover most of the time; ideal race conditions!

The Cadbury Marathon course is a 2-lap course designed to start and finish at the Cadbury factory. There is a very brutal short climb up to factory itself, not a very inviting sight when you know you have less than a kilometer to finish the race!
One of the interesting parts of this course is the small and seemingly stupid two loops around Claremont at the very start of the race before you head off down the Cadbury hill on your two laps. The bulk of the course is an out-and-back 21km track. The course itself mostly hugs waterfront and highways and as a result isn't overly boring. There's plenty of rolling hills and sections of road that appear flat until you run on them and realise there's definite up and down directions!
Reading race literature it mentioned there were only 3 aid stations which had me concerned but due to the out-and-back design and the fact you lap it twice means you pass those 3 stops 4 times, so it worked out fine as far as I was concerned.

I wasn't setting out for a record pace this time, I was still very stiff from the 10km the week prior plus I ran a 5k PB the Wednesday after the 10k race (I know, stupid, I got carried away) as a result I had planned on an easy 6min/km pace and just running it out with the hope of finishing cramp-free!

I met up with a bunch of fellow traveling runners at the start line and we placed ourselves in front of Cathy Freeman. New race plan, beat Cathy!
My mate Ultra George was out for a PB so we ran together for the warm up k's until he pulled the trigger! Once George left me (for dead) I settled into a comfortable pace and just chewed the ears off anyone who strolled up next to me, as I always do!

Liesel wanted to crack 4:20 and late in the race when her partner caught up to me (he was cruising to finishing his first marathon in 4:13 and wasn't stopping for anything!) I decided to drop off my pace and see if I could pick her up. I was in luck and we managed to cruise home in 4:18, success! 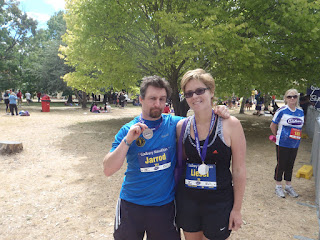 The only thing I did wrong this time around was dropping all my gels somewhere before the 2hr mark. I had been tweeting (#twunning)  and playing with my phone (which shares the same pouch as my gels) and had left the zip open, I didn't notice they had fell out until I reached in for a gel some time later! I ran the race on water, choccies and I took a (disgusting) GU orange late in the race. I definitely felt the effect of a wall, but I surprised myself by being able to push through it and drag a friend with me at the same time! 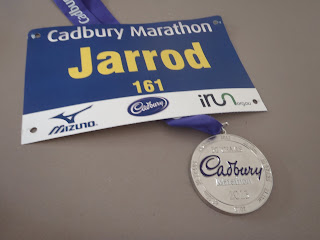