Posted by Jarrod
So it's actually been four weeks since my last marathon. I have managed to slip back into my Melbourne Marathon training program from last year with some improved targets. As a result I've hit quite a few speed sessions, long runs, and even gym work during this "break". I was feeling confident and was planning to take Blackmores Sydney Running Festival Marathon on as an aggressive training day. Work has been, as usual, a bit too hectic but I've also had Little Miss J in my care the past few weeks leading up to the marathon so sleep has been a little lacking, otherwise everything has been going well!

On the Saturday before the race I flew into Sydney nice and early, found my Hotel which was closed and unable to check in or even dump my bags until 2pm - but no complaints, you get what you pay for, and this place was cheap!

So I headed off to a nearby boutique brewery called "Redoak", where I sampled several of their beverages and enjoyed an epic pulled pork pizza. This place was fantastic, the service was great and both the beer and food were delicious and they even let me charge my phone whilst I sat at the bar, so I highly recommend you check them out if you are in the city!
Next up was a quick trip to the expo to collect both mine and Simon's race kits. I thought I would have some time to kill there, being an expo, but it was nowhere near as big and glorious as the Perth expo (City to Surf), so I was out of there as soon as I snapped my picture for instagram to enter into the Asics competition!


After finally getting checked into my Hotel, next up was a quick meet up with @EwenThompson and @FionaABennett for afternoon tea near Hyde park, we had a great old chat about race strategies and general running business, before wandering off through the park to check out where they had this wondrous scaffold bridge setup for the marathon the next day! 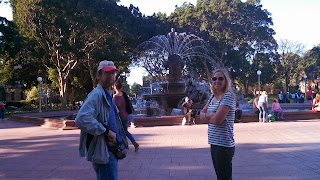 Then I just had to go for a run, the weather was fantastic, I had time to kill and I was curious about the time it might take to get to the start line from our hotel, so I headed off on my own little 8km scenic tour of Sydney!

After my run, Simon finally arrived in Sydney so we went to a place called Hotel CBD where we had, probably the worst pre-race meal we've been served to date, half cooked hamburgers :)

The Blackmores Sydney Running Festival Marathon course is superb - from a tourists perspective. Lots of switchbacks, but no laps! The course takes in a heap of the wonderful sights of Sydney crossing the iconic Harbour Bridge, running through places such as Centennial Park and Hyde Park, and passing by other icons like the SCG and Circular Quay with the finish line right at the Opera House.

Not that I had much of a race plan, my intention was to hang back at the 4-15 marathon pace for the first 10km or so, then gradually build up the pace to hopefully finish in under 4; a nice birthday present for myself!
So I set off at the start with the great Bruce "Digger" Hargreaves, the 4h15m pacer. As per the plan I stuck in front of that pack for the first few kilometers... Then I started to build my pace, what I thought was gradually...
Running over the bridge was amazing, it is hard work but so worth it. I think the excitement of the bridge got the better of me and sent me off into an excited-puppy-like-state of running..
By the 5km mark I had caught the 4-hour pacer and by 6km I was streaking away from them! As I came through one of the switchbacks I noticed how far I was in front of the 4-hour group and decided I had to be going too fast, so I backed off.
It took until about the 15km point before they caught me up again and by then the group were running considerably faster - so it seemed anyways.
I managed to sit in front of that group and ran quite happily until about the 25km point when things started to get worse. This is normal in any race, we expect it! I tried my best to "harden up" to hold my pace but I slipped behind the 4-hour group and settled for my own, slower pace. I've said it before, that part of the race from 22-32km is the bit I hate, mentally the hardest!

This is about the time where I met Digger's pace group on a switchback, he taunted me saying "we're coming to get you" as he had been all day, which I again laughed off. But as the km's clicked over,sure enough, he was reeling me in.

Determined to stay under 4-15 I put a bit more effort in on each downhill, attempting to make ground back on the 4-hour group, but each uphill on the very undulating course was taking its toll on my legs. I didn't feel overly exhausted but my legs just wouldn't turn over as quick as I wanted them to!

OH it's definitely worth mentioning - I ran this entire race completely keeping to myself. I didn't tweet, I wasn't even chatting much, it was very much a test of my body and current racing condition. I still took the time to take in the amazing views provided almost constantly throughout this course, but after the bridge I wasn't stopping for pics :)

Coming up to about the 32km - this is the point in a race where I feel somewhat relieved, heading into single digits with a nice manageable race distance remaining - but in Sydney this means you are looking and heading straight at the Opera House and thus the finish line, only to be turned left, and off you head out to the Darling Harbour precinct for a jog along the waters edge.... all the way to the finish again!
With about 2km to go I heard an evil laugh from maybe a hundred metres behind me. It was Digger telling everyone "I told you we would catch him!" and so it seemed, I had the 4-15 pace group gunning for me!
Thankfully this spurred me on and I started knocking out a faster pace; just as Digger had done when I ran my first ever Marathon at Melbourne in 2010 (he was the 4-30 pacer) when he snapped me up and dragged me home !

I think the heat of the day got to me a bit - it wasn't stinking hot, but training in regular 8-12 degrees and often at night, doesn't prepare you for 22-26 degree days in full sunlight!

All-in-all I was happy with my time, considering how the race had progressed for me. I had a great time and really did enjoy the course. Its shown me either I haven't trained as hard as I thought I had, or I didn't taper off well enough... Either way, I'll be doing my best to improve both factors for Melbourne Marathon on October 13th - Here's hoping for excellent Personal Record conditions!

Check out my next post for more about my stay in Sydney!