Posted by Jarrod
I don't feel like doing a traditional race report, this is more a course review with my stats thrown in!
Basically this is a local 10k race on a course that is far from flat that has been run annually since 1982. The course record held by Brian Lewry is 30m30s and has stood for quite a few years now. This year a Mizuno sponsored runner came from Geelong and ran it in 30m49s for first place! 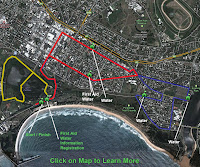 For a 10k race there are a number of climbs, but not mountains or anything big enough to compare to my Comrades experience (will post about this one day)!
The first 500m are uphill as we leave the Lake Pertobe precinct. Liebig Street is a subtle but taxing climb before you hit 2km.
Then there is a nasty little roller coaster section from 2.5 to 3km as you round the back of the Fletcher Jones factory. Straight after that you climb up Bostock Street for another 500m. Then it's a relief to run fairly downhill/flat until you hit Hickford Parade which is another rolling section that catches a lot of people out as it is usually hot and fairly still there. The killer hill is a climb up Nicholson Street from about 7.5 to 8km - from there if you've got anything left you can hammer home.

The weather was great, clear skies and mid twenties (*C) with generally subtle breezes as we usually see around course. However, in the sections of the course nearest the beach the wind had picked up considerably on previous years.

As far as my race goes I basically went out, hungover, with a plan to try and hang onto 4:25min/km pace as long as possible! I started well and caught and passed the 45min pacer and held him off until Hickford Parade (about 6km). As I said, that's one of the climbs on this course that sorts people out. I just couldn't hold my pace there.
In my head I decided my 45 target was shot and worked out that in the next 4km if I held 4:45min/km pace I'd end up with roughly 46 mins and that was acceptable as it would be an equal PB! I marched on and found I was hanging on better than planned, pulling out some fast pace for the last 2k and I surprised myself even though I didn't catch the pacer! i spoke with the pacer in the finish chute and he said he was upset that he ran hot by 30secs and came in at 44:30, I told him that was perfectly paced and very well done, and since the course was 9.9 by my garmin, he was bang-on pace.
As a result I still managed 45mins even though I thought the pacer was long gone in the distance!


Overall I enjoyed the race and the post-race giveaways (although I missed out). I also ran to the start line and the long way home again to round it out to a nice 18km day! Stupidly I forgot to sunscreen so I'm a bit tender on the shoulders now!

Now tell me, have you ran drunk or hungover before?
At a race?
How did you go?
Am I an Idiot?
Email ThisBlogThis!Share to TwitterShare to FacebookShare to Pinterest
Labels: 10km, achievements, events, race report, running
Newer Post Older Post Home