Posted by Jarrod
This was my second ever Canberra Marathon, second in my Aussie Sweep Marathons for the year, and the third race in my #13in2013 series. I was looking forward to the event since late last year when I convinced a good friend of mine to run it as his first marathon. Sadly he bailed on that plan and turned up to support me instead! NEXT YEAR mate! 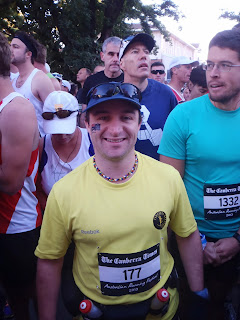 I just realised I didn't actually take ANY photos during our tweetups, so here I am looking stupid at the start line for Canberra Marathon instead. Check out Jenelle's blog post for a few pics from our tweetup!

I flew in to Canberra Saturday morning which gave me time to get some shopping in, find my friend's house, and get a short nap in before my social networking plans kicked into gear.
We had organised a runner tweetup lunch/afternoon tea at the War Memorial Cafe (aka The Terrace) and there I got to meet Ruth, Ewen, Jenelle (Blog: MummyLovesToRun Canberra Marathon), and Andy for late lunch. It was fantastic catching up with these people, putting some faces to the names and having a chance to ramble on about the many different aspects of running that would otherwise bore my usual friends!

The next thing on my agenda was another meet up with FB friends at Brodburger, which is a fantastic "little" burger caravan in Canberra. Simon, Dilwyn, Neil and his Wife (whose name escapes me) joined us for dinner in the chaos of shared tables and 'every man for himself' style seating arrangements. Simon is running the ANZAC sweep this year which is basically the same as me but includes the NZ north and south islands. Dilwyn is also doing the same thing, but at the Half-Marathon distance. So dinner was basically a case of the three of us comparing calendars, flight bookings and accommodation plans! Of course we enjoyed a good carb loading as well. The food, although it took quite a while to come out, was fantastic and well worth the wait! (that's a backwards recommendation)
After that I made my way home to load up on Berocca and get some sleep.

As it turns out the weather was quite alright for the race. I'd packed with a cool start in mind so went out with gloves on, but quickly removed them. I'm not sure how warm it was but apart from some clear sunny skies for an hour or so around 10am, it was overcast and quite mild. Probably ideal for a PB if you were well prepared (like my mate George!).

The Canberra Marathon course loops three times, each loop is slightly different. The first loop makes a nice close pass right up around capital hill, then for the next two loops you basically make your way out along the highway that skirts the base of Black Mountain then back to the start/finish area.

This course is not flat, if anyone tells you it is, they probably haven't run it or they are evil liars!! Sure you don't run up steep inclines for kilometers on end, and I guess it's flat compared to roller coaster run, but otherwise, NOT FLAT! The section of course on the freeway around Black Mountain can be very deceptive and the slow grinding climb involved in that part of the course seems to catch quite a few off guard including myself - even when I knew it was there since I ran it last year!

So I was nice and early to the start area since my mate Leslie dropped me right at the school, which gave me some time to mingle and take in some of the pre-race vibes. I saw my friend Simon who I met on Facebook, he happens to be doing the ANZAC sweep this year too. he introduced me to John Dutton who was just going to have an easy run and apparently working his way back to full pace - I found out after the race,  he placed 2nd in the half marathon! 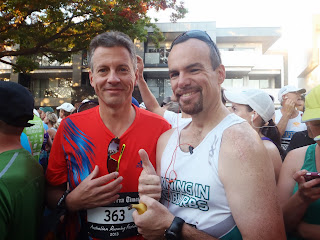 Neil and Simon ready to smash the Marathon

I had decided the night prior that my plan for Canberra was to break the typical marathon rules and go out hard, see how long I can hold on and then stumble home. So the race started and we slowly moved off but I quickly settled into a place right on the 3:45 pacer's shoulder.

For the first loop I was just running to heart rate and monitoring my pace on the Garmin. It's probably important to say here that I haven't ran a marathon with my Garmin in ages. On top of that I've never raced with the heart rate monitor attached. So I tried to keep my HR in the lower range of aerobic. I pretty much ran the first loop on my own listening to my breathing and checking in on my HR. This was until somewhere at the back of Parliament House, my close Tasmanian friend April came out of nowhere with a full speed spank on my bottom! So began my yapping!

It was great to catch up with April who was running the half, as we chatted I settled into the half pace with her for the next 3 or 4 km's. Then I spotted the "you just got chicked" t-shirt that belonged to the lovely Kate who was also running 'only the half'. I then proceeded to talk her ear off until the point where the half marathon runners split away. I loved hearing more stories of the awesome Mr The Rake who, by the way, I'm shattered we didn't get to meet at our tweet up! 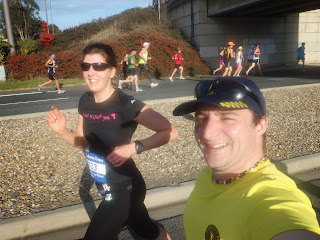 After parting ways with Kate (when the half marathoners were forced to take a left and we went straight) it wasn't long before I found new company in the form of "Stereo Jo" - two runners both named Jo training for their first Comrades Race. They were running hotter pace than I'd like but for the sake of conversation I settled in on their shoulders and talked up some comrades! I ran with them until close to the half way mark.

Up until this point I'd been feeling alright being so distracted with all the chatter and interesting heart rate data. I was quite surprised to see that my HR was a lot higher than it actually felt. I'm not sure if it was the fact I'd seen these numbers or not, but I started to feel like I was having a rough day out.

and dropped away from Stereo Jo backing my pace off trying to drop my HR down. I got back into a good rhythm and felt fine until about the 27km mark. This is probably the first time I've really hit a wall. The next 4km were absolute hell. I can't explain why, my legs were tired but no more than any other long run weekend. I wasn't thirsty, and I hadn't missed a gel at all, everything just felt like really hard work!

I reverted to my Comrades Training and made a few deals with myself to keep moving. "Run the next 3km then walk for a few hundred metres... " I told myself. Then after 2km I would decide the next uphill was a better time to walk... Haha!

So I got myself to about the 33km point where I decided that I still needed some more motivation, and it wasn't coming from conversation with awesome runners anymore, everyone was getting into the business end of the race - it was quiet, and nobody, including me, wanted to have a chat!

So I threw my headphones in and fired up my music on my phone. Straight to pendulum. Boom! This stuff just psyches me right up. This gave me my second wind and allowed me to really run out the remaining section of the race - pushing the pain away and dancing my way to towards the finish.


This stuff sends my legs into overdrive!


It was great to see a bunch of my fellow tweeps and fbeeps on course throughout the day cheering us on! My best mate Leslie and his girlfriend were hanging about the place and it gave me a real boost to see them there at the finish all smiles!
In my usual fashion I meandered slowly through the finish chute and found more of the tweeps that missed our tweetup! 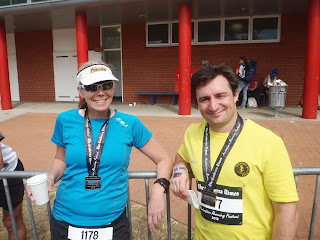 One of my tweeps, Keren in the flesh!

We were swapping numbers and stories for a few minutes then Stereo Jo turned up again! They'd just finished the 50km distance! I was impressed, they have some decent training behind them, managing 30km on Saturday and then running a 50km race Sunday in under four and a half hours! So a big HI to Stereo Jo, Tovey, and David (iirc) you guys will have a great race at Comrades! They should be deep in their Taper now and I'm excited for you all!! (and a little jealous) 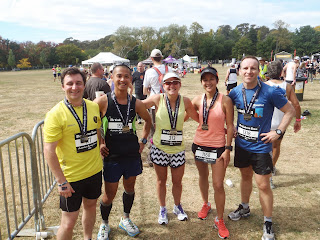 
What did I learn from this race? Turns out I can hold a solid conversation even when I'm at 95% max HR! :D
Also, I think it means I can run much faster marathon times but it will take more strength and speed training than the simple endurance training I've done so far!! 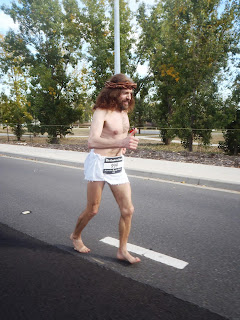 Oh I almost forgot to mention - JESUS! He was running this race. I tried to make a few jokes with him before I realised what he was saying "I no speak english, I speak spanish" followed by "random spanish words"
So I put my Dora lessons into top gear and threw him a "Vaminos, Delicioso, Salta" which I think means Hurry, delicious, jump! Anyway it was fun!