So this is my fifth race for the year already! The third state in my Aussie Sweep. The Jacobs Creek Barossa Marathon is run by the SA Road Runners Club which started as a 17km race in 1981. It was changed to a Half-Marathon in 1984, 5km and 10km events were added in 1995 with the Marathon distance added in 2012.

Obviously I was running this on the back of having ran Great Ocean Road Marathon only the weekend prior, so my race preparation was simply, recovery massage from my man, the great Greg Logan. This man has magic hands and a good knowledge of sports related massage. I tell him I've ran a marathon and he gets to work. I only turned the legs over a couple of times in the week prior to this race. I wanted my legs to get maximum recovery during the week.

The weather forecast for Barossa was pretty much perfect, low chance of rain, cloudy and mild! There was a slight drizzle of rain at about 5-6am. Enough to damp the ground, but that was it for the day!

The Barossa Marathon course is amazing. The town of Tanunda where the course starts from, is a picturesque little town, "quaint" is the best word to describe this place. Think gorgeous little cottages with rose gardens ;)

It was a nice change to run another marathon that isn't a multiple loop course. The race takes you right out of town and around the surrounding vineyards, overlooking the rolling hills and various wineries.

The course continues on a few out and back sections including one walking track that is maybe 5km long and runs straight through the middle of several vineyards.

I picked up my race kit on Saturday from the Richmond Grove Estate Winery. It wasn't until I met my fellow Aussie Sweeper Simon at the Tanunda Hotel later that I realised my bib was incorrect!
So my race day started early as I had to get to the race office in the morning to change my bib from a walker to a runner! Then I had a 2 hour wait until the race was due to start. The actual start was then delayed a further fifteen minutes due to some technical issues with the timing equipment, which sent a lot of runners scurrying off for some warm clothing or another lap around the oval near where we started.

Once we were finally underway I realised I had no race plan! I decided to match pace with someone and see what happens.
I chose the 'Barossa Shirt Man', aka Brenton. Since he looked like he was holding a steady pace, coupled with the barossa shirt I figured he knew what he was doing.
We were hitting pretty consistent 5:30min/km pace and I was feeling very good about it. The views encountered along this course provide a great distraction from the task at hand and combined with conversation from new friends Brenton and Nickie (along with a few others whose names I didn't get) we ran easily to 10km.

After that, we ran together with surprisingly little conversation, and I was still feeling really strong especially considering I ran great ocean road only last weekend! My right calf was feeling really stiff around the area where the cramping started last week, but i couldn't tell if it was just fatigue or the early signs of a cramp. I pushed on with the hope this was just the pain of hard work!

We passed the halfway point in about 1h56m and a few more people had gathered onto my sub 4-hour bus. I suddenly felt the pressure to push for a 3-59!!

Of course I was involving myself in conversations with a variety of people as it seems word had spread back down the field that this idiot (me) was running Barossa only a week after GORM! I just kept telling them, there's a guy with a TNF100 shirt on further ahead (a 100km race only a week prior as well)! For the next 4 or 5km from halfway I had several people quiz me about my crazy sweep and in the process the pace fell away and my chatty group scattered.

I kept running and enjoying myself, but I felt fairly alone from this point, I guess not everyone can handle my chatter! :) I had to whip my phone out and fire up the Tom Jones! Yes I was happily singing along to my TJ when a couple of young lads by the name of Geoff and Nick joined me, no doubt they were worried about this strange fellow running and singing to himself! 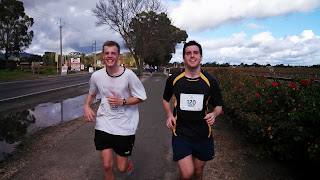 It was their first ever marathon. The really didn't know what was ahead, we chatted about their training (or lack thereof) and I settled in with them briefly before I let them head on since they were keen to run a bit harder. I caught Nick a bit later as he was walking, completely shot, the wall got him! :)
I also saw 'the man in orange', Brian, who is a race walker but madder than me. I swear he goes to an event every weekend, always wearing his signature orange race outfit! it was good to see him during the race for a high-five instead of before or after most events!

I slogged out the last 10km, the only reason I didn't break 4 hours was because of the right calf. It was feeling stiff as I said, but it never got to a cramp of any sort; I think in hindsight that was my head, it was just hard work. I'd convinced myself not to go too hard and as a result I trundled in for a 4:08 which was a slack 2:12 in the second half!

After the race I headed over to Gawler to meet @PaulRunsLong for lunch and a celebratory beverage! It was great to catch up with another fellow runner who I've got to know thanks to Twitter! Super nice guy in real life, just as he is on Twitter, and the food and service was excellent at the Cafe Nova - it all made for an excellent finish for my trip to the Barossa. If only I had some more time, I would've drank all sorts of wonderful wines!